CHRISTOPHER CHAGNON for THE STORYKEEPERS PROJECT

Writer and photographer Christopher Chagnon shares here an excerpt from his recent novel “The Dregs of Presque Isle.” Raised in Northern Michigan, Chagnon shines a light on the darker side of small town life through the prism of a French Canadian family living above their family owned funeral home. One of twelve children, his work is peppered with the Joual heard during his youth. In this excerpt he sets the stage with a particularly life-changing event. (Please be advised – contains description of embalming.)

Excerpt from “The Dregs of Presque Isle” 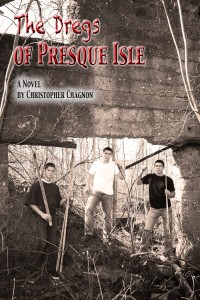 The narrow passage to the room was cold, damp, and frighteningly dark. But I made my way past the blue curtains that hung heavy from the ceiling in the dimly lit parlor, and through the twin doors. I was sneaking in to see Remy Fortier laid out on the porcelain table; pale white, stiff and dead.

Two weeks earlier, we were climbing the tall blue spruce tree next to the rectory after catechism, but polio killed him within a couple of weeks. At least that’s what the death certificate stated. My father stood over him wearing a white lab coat while clutching a cold, saber-like steel instrument in his gloveless hand. I was shocked at the sight of Remy.  His lips were like dead rose pedals, and his skin was drained of color. He looked more like a mannequin in Fay’s Clothing store than the boy I went to catechism with, and had to say five Hail Mary’s, and five Our Fathers as punishment from the nuns for climbing the tree during mass. There were bruises covering his body that should have healed since we slid down the wide, pine needle boughs and crashed on the ground. Mine had.

Pa was preparing to embalm Remy and unceremoniously introduce me to the funeral home business for the first time. I hesitated for a moment, sheepish, afraid, and then stepped into the embalming room. The air was pungent with the bitter smell of embalming fluid that burned my nostrils. A small fan tried to suck air outside with a slow churn through a portal in the wall. I hovered near, and clutched the paint-chipped doorway as he walked with great indifference around the body like a hunter about to field-dress a deer. He was a professional.

This was the first dead body I ever saw. I didn’t cry as I watched my father work on Remy, even when he took the long saber-like trocar and thrust it back and forth into the young, yielding skin of Remy’s stomach to evacuate its contents as the grey white coat he wore floated away from his legs. The frightening, sucking sound of the instrument pulled and ripped away at Remy with gushes of blood and debris until the clear, pink embalming fluid emerged, and drained along the trough of the table.

“Venez ici,” he said to me while motioning to come to the table.  “Massage his arms to bring da blood up his body-like dis,” He took one of Remy’s arms firmly and pushed his skin upward. This brought a gush of thick blood through the cannula where it drained onto the porcelain table. I held his stiff arm and made a feeble attempt but couldn’t do it so he did. When he was finished embalming he looked at me and said in his Joual French Canadian dialect, “Beyah.”

Mom stepped into the room and put a compassionate hand on my shoulder.  “Romeo, he’s too young for this right now.  The other boys were much older when they started.” she said.

“He came in and dat showed me he was ready. Why else would he come in? He did fine, Mildred,” he replied.

“He went to school with this poor child, for heaven sake,” she said, “I don’t think…”

He interrupted, “Let’s see if he comes back. Dat’ll tell if he’s too young,” my father said as he removed his bloodied lab coat.

There were untimely deaths; Tommy Bloom died when his tractor tipped over and crushed him in his barnyard.  Lucille Schmidt was killed when a car strayed off the road and struck her while she walked her dog along M-33.  Horace Frank drowned when his canoe tipped over on Black River.  Death was easy to find, and we saw it in all forms, shapes and ages. I was going to see more embalming on that frighteningly cold porcelain table in years to come. This was the way it was going to be for me, and my two older brothers, for the rest of our time living above the funeral home my father owned, the Romeo Cosette Funeral Home in Chandlerville, Michigan. The year was 1958, and I was eight years old.