Word of the Week…en Français

Beaver, beaver furs. The pelt of the beaver was at the center of the North American fur trade, owing to the popularity of beaver hats in Europe. Demand continued through the early 19th century before dropping off due to changing fashions. The animal, it is said, was hunted nearly to extinction. The beaver is the national animal of Canada, lives in family social units, and is equated with industriousness. Sources: Collins Dictionary and Canadian Heritage. 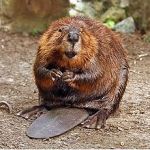