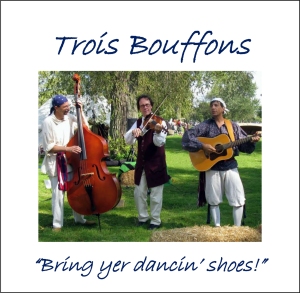 This album of traditional French and French Canadian folk music is a lively, interesting and engaging release from the Michigan group Trois Bouffons. The group is led by Genot Picor known throughout the state as one of Michigan’s foremost raconteurs. He is widely known for his performances, including song, music, and storytelling, about traditional French, Métis, and Native American cultures to audiences ranging from schoolchildren to adults. Classically-trained Michael Francis and award-winning Mark Szabo, accomplished musicians and storytellers, complete the trio.

Bring Yer Dancin’ Shoes: Music from French Canada and Beyond excels by lively renditions of music that make you want to dance. Songs include pieces from the Voyageur repertoire as well as songs dating back to the French court, music that made it to Nouvelle France with the earliest settlers and explorers. I first listened to this CD on a long road trip through Michigan last Summer and it was a wonderful album to have on the journey.

According to Picor, the name Trois Bouffons, dates back to medieval France. The bouffon, or jester, entertained the king and his court. After the fall of the monarchy, the name became associated with street performers. He speculates that it is related to the word “busker.” A more recent release by the group, From the Delta to the North Country is described as more adventurous and includes some tunes from New Orleans, some Texas swing, pure Americana traditionals, like “Shenandoah,” “Miss McLeod’s Reel” and “Deep River Blues.”

Samples of Trois Bouffons’ music and information on ordering can be found on the group’s website.