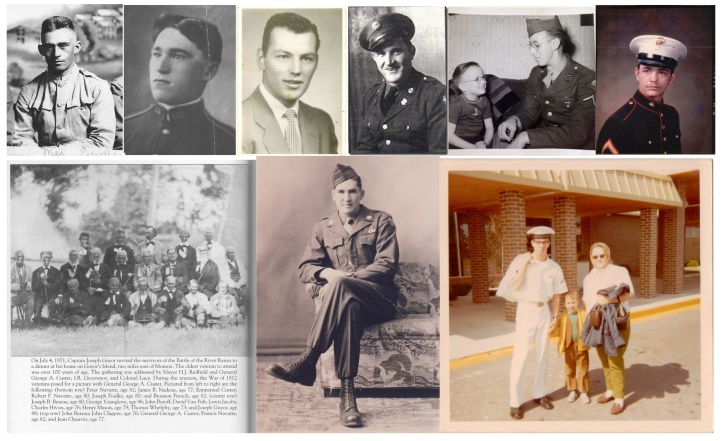 Veterans Day is November 11th. This federal holiday grew out of Armistice Day observances and proclamations made in the years following World War I focusing on WWI vets. World War II veteran Raymond Weeks of Alabama had the idea to expand the Armistice Day celebration from just veterans of World War I, to all veterans of military service. Gen. Dwight Eisenhower was approached with the idea and lent it his support. Eight years later, President Eisenhower signed into law a bill changing the word Armistice to Veterans. All veterans who have been discharged from military service with any status other than dishonorable, are honored on this day. By contrast, Memorial Day honors specifically those who have died in the course of their military service.

Several years ago I created a page honoring veterans of French Canadian and Métis heritage from the Great Lakes region here on Voyageur Heritage. Gathering photos, names, and stories of veterans from their family members and descendants has been a moving experience personally, and for every new person added to the Wall of Honor, the history of our regional culture is expanded. From the French and Indian War to the wars in the middle east, French Canadians and Métis from the Great Lakes have served in the American and Canadian militaries. Today not only is this digital “Wall of Honor” available here on Voyageur Heritage, it is also being archived at the Library of Congress  ensuring that it will be available should Voyageur Heritage itself cease publication.

One question that has come up from time to time is, why should we make a special effort to remember one ethnic group when so many have served? It bears considering that many different ethnic, cultural, and religious groups have for decades created their own veteran associations and memorials. Outside of New England and Quebec however, veterans associations dedicated solely to our own people have long been missing in the wealth of such organizations. One of the images in the Wall of Honor attests to the importance that men and women often put on coming together with fellow veterans of their own background: the image of veterans of the Battle of the River Raisin in the War of 1812. Many of these veterans were of French Canadian heritage, the very people who founded Frenchtown (River Raisin) and whose families had already been in the Great Lakes region for over 100 years.

Focusing on ethnicity, or in this case the ethno-cultural identities of both Métis and French Canadians, brings into focus their unique experiences which formed their identities. It would be a hundred years of more after the War of 1812 before these groups began to expand their family ties to include members of other ethnic and religious groups. Today their descendants retain a deep association with their family histories and their French and Indigenous cultural traditions. This identitarian legacy is not an accident of history or misplaced. It is a precious tie that binds us to a past in which service was survival, duty, and pride in your country.

Honoring our veterans, past and present, is part of the puzzle of retaining our sense of ethnic identity and cultural legacy. The Voyageur Heritage “Wall of Honor” is a small project for closely linked “micro-cultures.” It is a story that must be told to fully understand what has driven each new generation of Métis and French Canadians to take up the cause of our nations when called to service.

© Copyright is reserved to named authors and Voyageur Heritage in all cases. Permission is required to reuse material on this site. Please contact the editor of the blog or individual authors for permissions. Named contributors retain copyright to their own works and must be consulted before their works are used in any way.
Loading Comments...
Comment
×
<span>%d</span> bloggers like this: